Uses
Leptadenia reticulata a traditional medicinal plant species, is widely used in traditional medicine to treat various ailments such as tuberculosis, hematopoiesis, emaciation, cough, dyspnea, fever, burning sensation, night blindness, cancer, and dysentery. In Ayurveda, it is known for its revitalizing, rejuvenating, and lactogenic properties. This plant is one of the major ingredients in many commercial herbal formulations, including Speman, Envirocare, Calshakti, Antisept, and Chyawanprash.

The therapeutic potential of this herb is because of the presence of diverse bioactive compounds such as α-amyrin, β-amyrin, ferulic acid, luteolin, diosmetin, rutin, β-sitosterol, stigmasterol, hentriacontanol, a triterpene alcohol simiarenol, apigenin, reticulin, deniculatin, and leptaculatin. However, most biological studies on Leptadenia reticulata are restricted to crude extracts, and many biologically active compounds are yet to be identified in order to claim the traditional uses of Leptadenia. reticulata into evidence-based uses.

At present, Leptadenia reticulata is a threatened endangered plant because of over exploitation, unscientific harvesting, and habitat loss. The increased demand from pharmaceutical, nutraceutical, and veterinary industries has prompted its large-scale propagation. However, its commercial cultivation is hampered because of the non-availability of genuine planting material and the lack of knowledge on its agronomical practices. In this regard, micro propagation technique will be useful to obtain true-to-type Leptadenia reticulata planting materials from an elite germplasm to meet the current demand.

Adopting other biotechnological approaches such as synthetic seed technology, cryopreservation, cell culture, and genetic transformation can warrant conservation as well as increased metabolite production from Leptadenia reticulata. The present review summarizes scientific information on the botanical, agronomical, phytochemical, pharmacological, and biotechnological aspects of  Leptadenia. reticulata. This comprehensive information will certainly allow better utilization of this industrially important herb towards the discovery of lead drug molecules.
Botanical aspects of Leptadenia reticulata 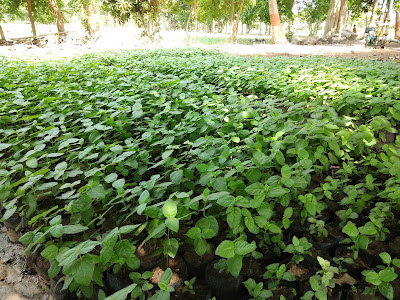 The Ayurvedic herb Leptadenia reticulata (Jivanti) is a member of the Asclepiadaceae plant family. Its taxonomic position is detailed as follows.


The plant grows well in tropical and subtropical climate and requires moderate rainfall and relative humidity. This plant also grows in arid regions, which are characterized by sandy soil, low organic matter, and rainfall deficit.

Black soil is found to be good for cultivation; however, red laterite soil is also suitable for its satisfactory growth. Open sunlight and support is necessary for healthy and vigorous growth. 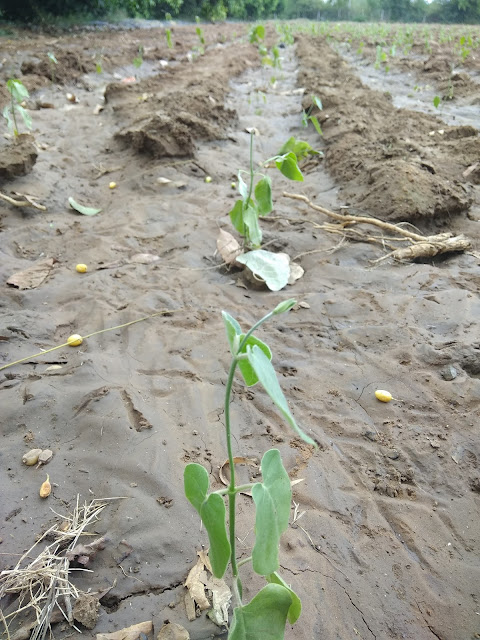 Plants reproduce vegetatively from stem cuttings, roots, and vines. Evaluation of various planting materials such as stem cuttings, root cuttings, and vine cuttings revealed that propagation using healthy and strong stem cuttings is most successful among all parts. Maintenance of high humidity around the cutting was found to be a critical factor to reduce the evaporative loss of water from cuttings.

High humidity was maintained by covering the planting material with clear plastic bags. After rooting, the plastic bag can be removed. Treating the cuttings with root-promoting compounds is found to be a valuable tool in stimulating root formation. Newly rooted cuttings should not be planted directly. The plants can instead be transplanted into a container or a bed before transferring them to a permanent location to increase the chances of survival. Although the fruits contain fairly large quantity of seeds, the number of seedlings was less because of low germination rate and limited availability. Fruits turn ripe during November to December. 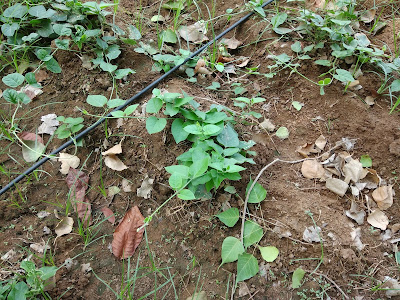 Seeds are collected before the fruits dehisce, and they are dried and stored. After soaking in water for 4–5 h, the seeds are sown on nursery bed with thick layer of sand. About 1–1.5-month-old seedlings were transferred to the main field.

The period of February-March is suitable for planting the cuttings. The cuttings of 12–15 cm long with 3–4 nodes were treated in anti fungal agent and root-inducing hormones to get better rooting response. Rooted cuttings were transferred to poly bags filled with Farm Yard Manure (FYM) and red earth in the ratio of 1:1 after 45 days. Three-month-old saplings intact in the soil were transferred to the plot prepared in the main field.

Intensive study was conducted at field level for yield and biomass by planting at different levels of spacing. Sapling survival rate at a spacing of 3 ft × 2 ft and nearly 7000 plants planted per Acre was found to be ideal for maximum yield.

Preparation of land and fertilizer

The lands were ploughed three to four times and the soil was made finer. The plot of convenient size was prepared with good irrigation facility. The months of February and March are more favorable for planting the cuttings. Cuttings can also be planted directly in polybags or seed pan filled with mixture of sand, FYM, and red earth in the ratio of (1:1:1) for better results. 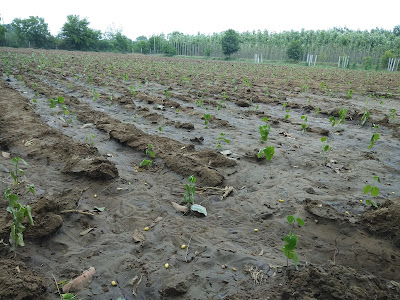 Manual control of weeds and earthing up at regular intervals of one to two months is found to be beneficial.

Control measures need to be undertaken against certain commonly infecting diseases and pests. Powdery mildew is reported to be a serious problem affecting the plant during the winter months. Various fungal diseases like leaf spot and leaf blight are also commonly observed. Infestation by leaf-eating caterpillars, aphids, and mites is commonly noticed which can be controlled manually or by spraying prophylactic sprays of monocrotophos (0.15%), dicofol (0.2%) etc. 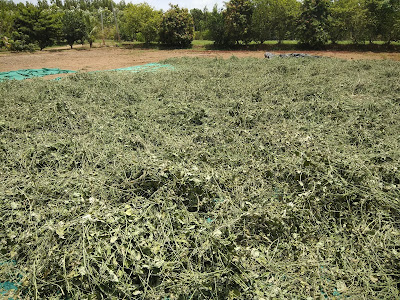 To protect the crop from termites, the soil mixture should be treated with phorate granules before transplanting them. The use of Chlorpyrifos 20 EC in 20 mL L-1 water solution is beneficial to control termite attack. Methyl parathion dust 20 kg ha-1 and Nevacron 1 mL L-1 are used to control the manifestation of grasshoppers in the rainy season and aphids and ladybird beetles in the winter season, respectively. Leaf wilting is occasionally noticed at various stages and can be controlled by phytosanitary measures and drenching the affected vines with 0.15% carbendazim.


Intercropping
Being a climber, Leptadenia reticulata needs a host plant or a stalk to support its growth. Healthy growth is noticed when the plant is grown in partial shady areas than in completely open areas. Therefore, it should be preferably intercropped at the base of certain common trees for support.

Intercropping is recommended for this plant to achieve the benefit of economizing water cost and controlling diseases and pests. Pests are less abundant when planted as intercrops than monocrops. The requirement of huge land space and physical support for climbing are other factors that increase the cost of cultivation when planted as a monocrop.

The crop can be maintained in the field for 10–15 years. The harvesting is preferably done twice a year without removing the root, which can serve as a future planting material or a root stalk. It is reported that higher yield can be obtained when harvested after 12 months. 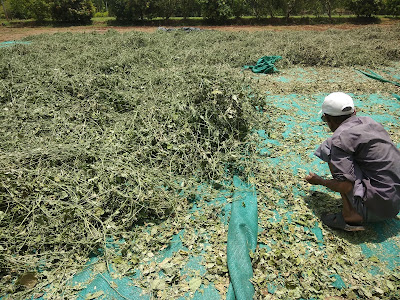 After harvesting, the roots and leaves are cut into required size and dried retaining the moisture content at 10% for storing. 500 to 600 kilograms of dry weight areal part per Acre per year yield was reported. Second year yield is incrase up to 1200 to 1300 kg. Third year yield is increase upto 2500 to 3000 kg. 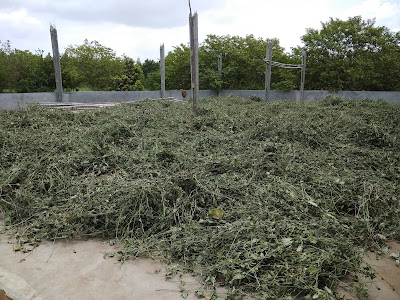 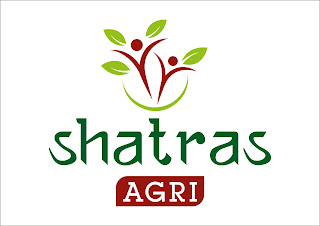 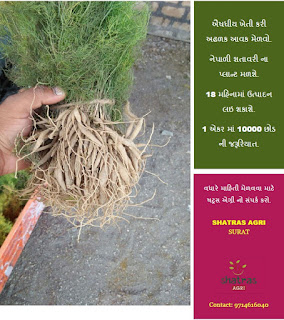 LOCATION: It is found throughout India and also cultivated both for medicinal & ornamental purpose. 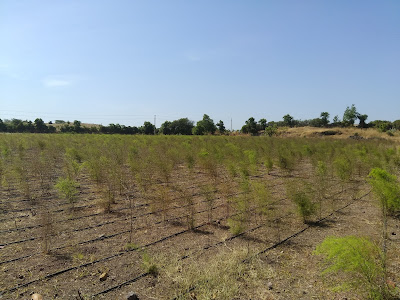 SOIL
Plant usually grows in a lateritic, red loamy soils, with adequate drainage. Being a shallow rooted crop, it can be easily grown under such shallow and rocky soils where the soil depth is hardly 20-30 cm.

CLIMATE
It can be easily grown in sub-tropical & Sub-temperate agro-climatic regions up to 1400 m. The crop survives under varied agro climatic conditions ranging from temperature to tropical hill regions. It can be grown in moderate hills like Shevroys, Kolli and Kalrayan hills and medium elevations of Western Ghat hills under condition where the elevations are between 800 to 1550 m above MSL. It tolerates drought as well as low temperature.

LAND PREPARATION
The soil is given 20-30 cm deep ploughing followed by 2-3 harrowings after few days. Grasses and weeds are removed. The land is properly levelled and 40-45 cms broad ridges are prepared for plantation, leaving 15-20 cms furrow space as a channel for irrigation. 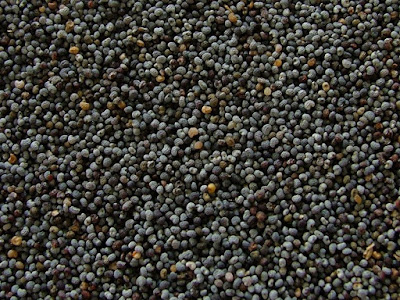 NURSERY RAISING AND PLANTING
It is propagated by root suckers or seeds. For commercial cultivation, root suckers are preferred over seeds. Seeds are sown in April in raised beds at 5 cms apart to facilitate decay of its hard seed coat by the time monsoon commenced. Germination start in 8 to 10 days after the first shower of monsoon in June. The seedlings were transplanted on ridges at 60 x 60 cms apart and provided bamboo stakes when the plants attained a height of 45 cms. The disc is divided in such a way that each piece possessed at least two buds along with 2-3 tuberous roots. These pieces are planted conversing the buds with 1 cm of soil followed by irrigation. The sprouting commenced in 8-10 days after plantation.

WEEDING
Two to three weeding are carried out during the rainy months, there after one in next 2-3
months. Frequent weeding is required during its early period of growth.

IRRIGATION
Irrigation is given after the rainy season is over, at the rate of two to three irrigations in
winter season and one to two per month in summer season. Care should be taken to avoid any damage to growing shoots at the time of weeding. Totally, about 6-8 hand weeding is needed to keep crop free of weeds. In large scale plantation, the plants are trailed on brush wood pegged in alternate rows. 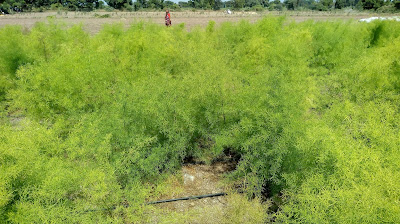 MANURES, FERTILISERS AND PESTICIDES
The medicinal plants have to be grown without chemical fertilizers and use of pesticides.Organic manures like FYM, Vermi Compost etc. may be used as per requirement of the species. . No serious pest and disease has been noticed in this crop. To prevent diseases, bio-pesticides could be prepared from Neem oil, Chitrakmool, Dhatura, Cow's urine etc.

HARVESTING
Flowering and fruiting occur in December–January. The plant are harvested after between 18 to 60 months depending upon the soil and climatic conditions.The roots are dugout collected and cleared. Boil the root, then peel it. Then dry in the sun. After removing the skin, it is cut transversely into small pieces and dried in shade. 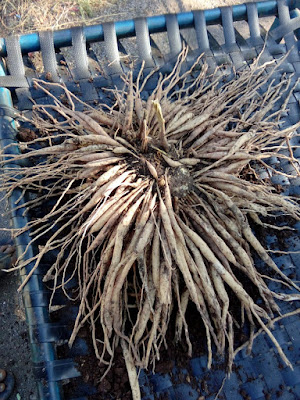 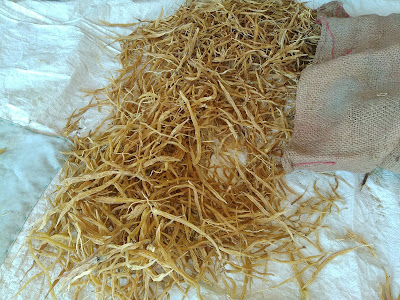 (If you require Yellow shatavari dry root please contact us)

We provide the marketing support for the Nepali Shatavari Dry roots. The best certified seed we take from us will only support it in marketing.

Used in differnet Dieses
Shatavari is an indigenous medicinal plant used in Siddha and Homoeopathy medicines. It is estimated that in India, more than 1000 tonnes of shatavari roots are needed every year for medicinal preparations. 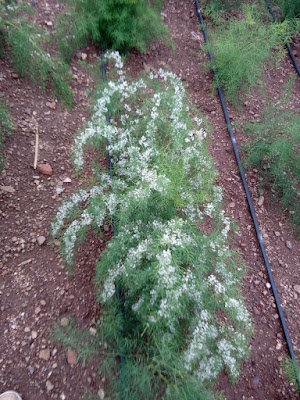 Therapeutic uses
Asparagus is reputed to be a tonic and a geriatric. The tubers are anti-diarrhoetic, diuretic, nutritive, tonic, aphrodisiac, appetizer and alterative. They are also reported to increase lactation. The plant is considered slightly sweet, and is useful in the diseases of physical weakness, blood, kidney, liver, scalding urine, rheumatism, gleet, and gonorrhoea.

Shatras Agri
Shatras agri is the single source destination for high grade Indian herbs, natural herbs, herbal extracts, and dried flowers. We are known as one of the most prominent and supplier of all types of medicinal herbs.